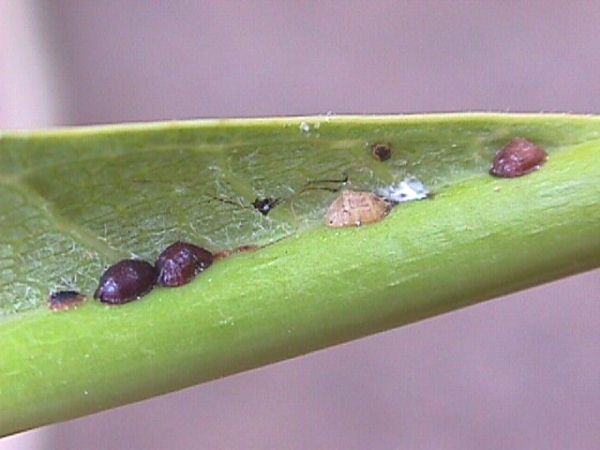 Scale insects will infest a plumeria plant stem before you know it, and treating scale on plumeria is never easy but we’ve gathered all of our experience and a few great tips to help to get rid of scale on plumeria quickly.

The really big bonus? Getting rid of scale will improve the overall health of a plumeria tree, and probably eradicate mealy bugs, spider mites, and aphids too!

What are Scales / Scale Insects?

Scale (Homoptera Coccidae) are small brown insects that look like tiny wet woodlice. Their hard shells are particularly unattractive to common predators like hoverflies and wasps. However, ladybirds and small garden birds do enjoy these major pests as a snack, so it’s good to encourage wildlife in your garden if you grow plumeria outdoors.

Scale insects parasitize plants, using plant sap as a significant food source making them serious pests if you get a particularly bad infestation.

Scale insects have piercing mouth parts, which dig deep into plant stems, and their shells form almost perfect domes around them to protect them from being easily flicked or scraped off plants.

How do Scale Insects Damage Plumeria?

Unlike aphids and mealybug, scale parasitizes the main vein of leaves and the water-carrying stems, so are usually clustered. By sucking sap directly from leaf veins and stems they cause rapid leaf wilt, resulting in deformed leaves that can curl up, eventually falling off.

The biggest risk from scales is fungal disease as the wounds they leave on leaves and plumeria stems are highly susceptible to fungal infection. As we’ll discuss later, scale insect treatment should always be followed by a fungal treatment to help prevent issues developing on plumeria leaves.

While scale insects are brown, their hard shells are usually coated in a waxy protective shell, so you’re more likely to notice them as a slimy-looking dot on the surface of a leaf.

The small domed structure of scale means they are often mistaken for plumeria rust, a disease that appears outwardly as small orange pustules. The treatment for plumeria rust is actually quite similar to treating scale though (neem oil), which we’ll discuss later.

While scales are often present on the midribs of leaves they are happiest on plant stems, where the phloem (water carrying cells) are located. By damaging the stem, they cause problems for the entire plant above that point, including plumeria blooms and flowers.

Once scale has infested a plant you’ll notice a slimy substance in droplets on leaves. this is called honeydew, a sweet secretion made by scale, mealybug, and aphids. While honeydew in itself doesn’t damage plants it increased humidity around the leaves and stem,s and can cause fungal problems.

Treating scale on plumeria is reasonably straightforward for the first season, but the real problem comes in spring when the eggs they lay just under the soil surface hatch, and the problem happens all over again.

To effectively treat scale on plumeria you will need to remove the top layer of soil in spring, and/or treat the soil with an insecticide.

Below, we’ve rounded up the most effective shop-bought treatments for scale on plumeria:

Horticultural oil is a miracle treatment for scale insects, starving them of oxygen and dehydrating their hard exterior shells instantly, completely removing them from the plant and preventing them from laying eggs in the soil.

Monterey Horticultural Oil is the most trusted producer of this organic pesticide and produces great value concentrated oil that is easy to use directly with a cotton swab, or by diluting in water.

Bonide is a dedicated plant care brand that produces all sorts of insecticidal treatments for shrubs and houseplants. These insecticidal granules are an incredibly effective ongoing treatment against scale, building constant resilience to pests, and helping to feed the soil in the process.

If reapplied every eight weeks you shouldn’t see any sign of scale or any other plumeria pest during the growing season.

An important precaution is that while Bonide granules are incredibly effective against eggs and pests there should absolutely never be used on edible plants or crops as their toxins can last in the soil, and travel into the plant for up to eight weeks.

3. Harris Ready to Use Neem Oil

I’m a huge advocate of neem oil as an organic pesticide. while it is non-specific and should be sued with caution outdoors, neem oil is very effective against common houseplant pests, including scale insects which are completely dehydrated by this natural remedy.

This ready-to-use mixed neem oil spray is safe to spray directly onto plumeria without dilution and even helps fight fungal infection when scale insects are gone.

How NOT to Treat Scale on Plumeria

It might seem counterintuitive, but there are a few really important pieces of common advice that should be dismissed. Below, I want to run through some myths, and explain why they not only won’t help with scale, but may make your problem worse.

Do not spray scale insects with a strong jet of water

Many pests can be easily dealt with by spraying scale with a strong jet from a hose. It’s incredibly important that you do not do this with scale. Scale insects reproduce rapidly, and by spraying them off plants you encourage egg laying in the soil, which will make your problem ten times worse.

The other negative effect of spraying scales off plants is a false hope! By spraying scale, more often than not you’re just spraying their waxy coating away, which will leave you thinking you’ve got rid of the bugs. What you’re really doing is leaving a perfectly clean scale on the plant – just less visible.

Do not scrape scale off plumeria leaves

Again, there are many plumeria pests that can be treated this way, but by scraping scale you release masses of honeydew which leaves a sticky slime on plumeria leaves. This slime clogs pores and will sit in the wounds left by scale insects, encouraging bacterial and fungal infection.

Caring for Plumeria with Scale

There are a few great ways you can easily prevent scale on plumeria, whether it’s on growing tips, new leaves, or on the soil in their pots. Below, we’ll talk through some things you can change today, to fix scale on plumeria in the future:

Scale are more common on indoor plumeria than on outdoor plants due to the higher humidity and fewer predators, making it an easy environment for them to thrive in. If you live in a warmer climate, keep plumeria outdoors in summer to prevent scale insects.

As well as location, it’s important to keep plumeria in bright light. Brighter conditions reduce humidity and, therefore, reduce the chances of scale infesting a plant. While plumeria does like some humidity, excess humidity causes them to store excess water which makes them incredibly attractive to scale.

The most common cause of scale on plumeria is eggs in your compost. Scale eggs are difficult to see and are often included accidentally in bags of compost. Plumeria that hasn’t been re-potted for a few years can still suffer from this fate too, as small infestations can go unnoticed, but lay masses of eggs in the soil, leading to a sudden scale infestation in spring.

Every spring, even if you’re not ready to re-pot your plumeria just yet, it’s good practice to scrape off the top inch of soil and mulch the surface. This removes most eggs as scale lay eggs just under the surface, and their larvae don’t borrow down.

In winter when your plumeria goes dormant, remove leaf litter from the soil. Scale are often attached to fallen leaves and hide overwinter in the warmer air beneath leaf litter. This is the same for indoor and outdoor plumeria.

How do you treat a scale on a plumeria?

Scale should be treated with an organic pesticide. they are frustratingly difficult insects to eradicate, but neem oil or horticultural soap is a great way to get visible scale infestations on plumeria plants.

What is the white stuff on my plumeria?

There are a few different insects that cause white stuff on plumeria; mealybug, spider mites, and scale. Scale and mealybug are both coated in their own mucus, creating a protective layer against predators. White fluffy spots on plumeria are usually spider mite eggs, wrapped in fine silk to protect them.

Can you use neem oil on plumerias?

Neem oil is great to use on plumerias, helping to prevent fungal infection and kill pests. Plumeria leaves don’t enjoy pure neem oil being directly applied though, so it’s best to dilute it, or wash neem oil off your plumeria once it has done its work!

Treating scale on plumeria is a two-part process. Start by treating the existing infestation and removing visible bugs, and continue with a regular plumeria care routine that includes fungicidal sprays and replacing surface soil in spring.

We’re passionate plumeria growers here, and we still get scale from time to time, so don’t worry if you have scale, it’s not a sign of poor plumeria care, just an indication that your plants are ready for a few small changes.